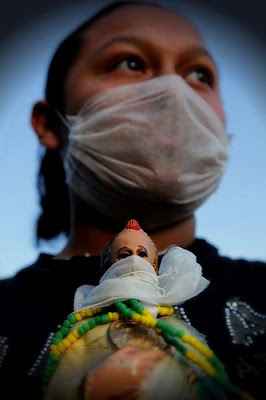 Mexico 2009 Photo © Francisco Mata Rosas
Debido a la influenza hasta los santos requieren protección
In April several people were affected by a new virus (commonly known as the swine flu) in Mexico. Some reports say there were cases found already in February - March in the US and Mexico.

On June 11 The World Health Organization declared that a pandemic was at hand:

"This particular H1N1 strain has not circulated previously in humans. The virus is entirely new. The virus is contagious, spreading easily from one person to another, and from one country to another. As of today, nearly 30,000 confirmed cases have been reported in 74 countries.

This is only part of the picture. With few exceptions, countries with large numbers of cases are those with good surveillance and testing procedures in place. Spread in several countries can no longer be traced to clearly-defined chains of human-to-human transmission.

To date (July 28) the total number of confirmed and reported influenza A(H1N1)v cases is 168,895 including 1,012 deaths according to The European Centre of Disease Prevention and Control (ECDC)

Given that countries are no longer required to test and report individual cases, the number of cases reported actually understates the real number of cases. 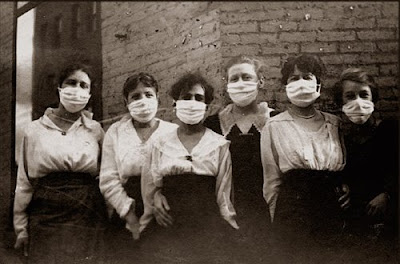 In 1918 a deadly virus caused a pandemic killing perhaps up to a 100 million people. The horrors of World War I were coming to an end, but people around the world were now facing yet another terrible threat.

My grandfather on my mother´s side died of "The Spanish Flu", and so did my grandmother on my father´s side. The influenza was taking the lives of many, often young people.

According to the WHO, ECDC and other organizations the current outbreak of "swine flu" should not be compared to the "Spanish flu". The current virus has so far not proved to be as dangerous as the one of 1918-19.

The pandemic is global and is already affecting all countries of the world. There is no easy formula, telling us how to describe it in pictures. The virus itself has been photographed in a microscope, but what about the effects it will have on society, on the communities, in the neigbourhood?

It will probably cause disturbances in public services like education, health care, public transport etc.

Will there be vaccine for all who need it? What about the social, economic and political dimension of the pandemic?

Send your pictures to pandemic@591photography.com
You may send series or single pictures or a reportage with text.
Pictures should be max 800 pixels wide, 72 dpi and jpg-formate
Depending on the material we receive, the pictures could be presented as series, single pictures, reportage or an exhibition.
This address will be open for submissions until the end of 2009.

Anonymous said…
Impressive ! There are things we can not avoid !