The future's already behind our shoulders: the blind camera. 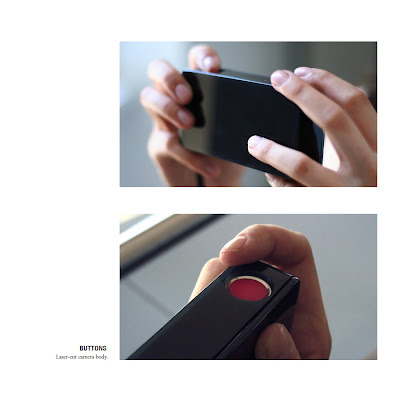 "Between Blinks & Buttons are two projects about the camera as a networked object. Through making their photos public on the internet, individuals create traces of themselves. In addition to their value as a memory, each image contains a multitude of information about the context of its creation.

Cameras become context-recorders which create references that go well beyond taking a photo. Through this metainformation, every image is linked to the precise moment in time when it was taken, making it possible to see what happened simultaneously in the world at that instant. This work tries to focus the user's imagination on that other, to create narratives that run between one's own memory and a stranger's moment which happened to coincide in time.

The installation Blinks is a prism which refracts the ray of time running through a photo into all the moments that were captured simultaneously in different places. Buttons is a camera that actually shoots other's photos, taking the notion of the networked camera to the extreme."
This project was conceived by Sascha Pohflepp as a diploma thesis in Visual Communication at the Berlin University of the Arts (UDK).
Labels: Blinks and Buttons tiberio fanti Tiberio's space