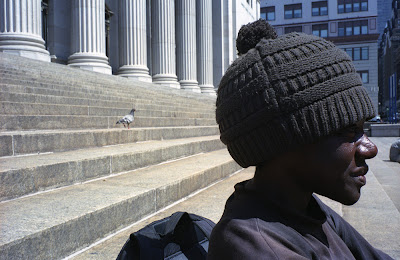 Amy Touchette has written an essay about her experience of photographing Deborah, a homeless woman living in the streets of New York City. The text is good and you will find some excerpts here along with Amy's photos. - Mr Urbano 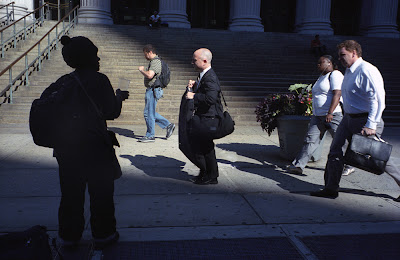 "When LoudMouth Press contacted me to make a photo essay about homelessness for the book Why Are You Surprised I’m Still Here?, my first reaction was to brace for the intensity of having to reckon with this unthinkable human atrocity that I so easily sidestep, even as a New Yorker. When I encounter things that seem so objectively wrong like homelessness—or even something less dire but still blood sucking, like government bureaucracy—I think of the span of human development, how we were once cave people and actually created these terrible ways of living, and in time acknowledged them and yet still wouldn’t stop them. It’s depressing to realize what we are capable of collectively, when we operate like one giant dumb ball floating wherever the overall murky average—tragically the reflection of only a few—takes us.

The morning I began photographing this assignment, I had at least fifty locations written down that interested me. My plan was to meet a homeless person and stay with him or her for a while, so I researched homeless shelters and soup kitchens in the city. I also asked friends who lived in New York where they saw homeless people, and one special friend’s response curiously stuck with me, so I decided to start there. When I emerged from the subway, I walked one block north and two blocks west while scanning for someone to photograph, when suddenly, from across Eighth Avenue, I set eyes on Deborah." 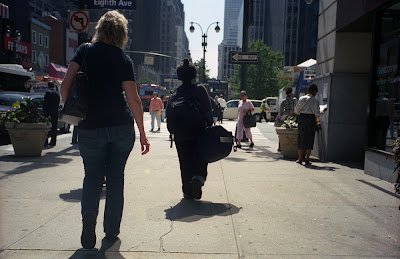 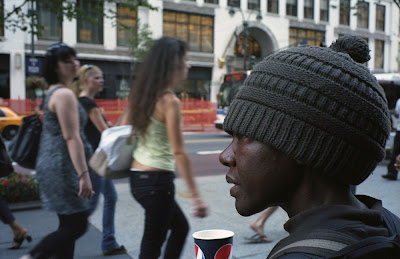 "Deborah was the perfect subject in every way. She did not appear to have severe mental problems or to be addicted to drugs, so I did not have to be concerned about my safety. She did not appear to be a thief or a liar. She appeared to be articulate, kind, polite, forthcoming, and unlucky. She was very unhealthy, but she was relatively clean, and she did not smell. Above all she let me photograph her, and she never set boundaries with me. I stayed with Deborah until 7 p.m." 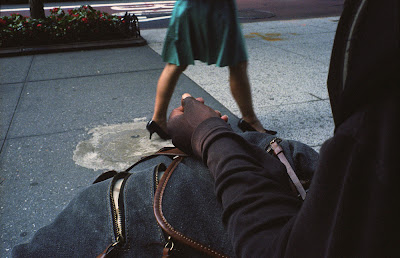 "She had been homeless for ten years, and you could tell by the way she took charge of her situation, always being armed with a cup for emergency peeing, wearing only long-sleeved shirts and two layers of pants, constantly striving to keep her bags and clothing impeccably clean, and tucking her lice-infested hair neatly away in a hat (the doctor had given her medicine to rid it, but there was never enough time in a public bathroom to use it).

She had learned how to survive living on the streets. But she said for the first two years she was homeless, the terror that would set in everyday as the sun began to go down and she would have to find a place to live out the evening hours was beyond any measure of fear she ever knew possible. “It was a difficult time,” was how she summarized it." 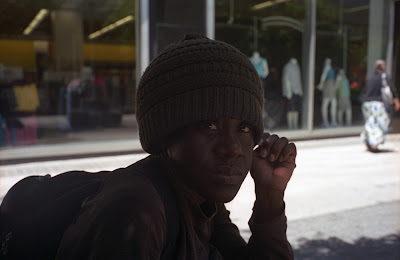 "At the end of the day, we went to Tick Tock diner for dinner and sat through overhearing a customer send her food back twice and in the end refuse to pay for any of it. Much of the time I strained to think of conversation that would suit the two of us, so there was a lot of silence between us, but I eventually came to enjoy that and took it as a sign of friendship. When I excused myself for the bathroom, I saw her watch me take my bag with me, maybe disappointed I did not trust her to leave it there, not knowing I made it a rule never to leave my Leica unattended the day I purchased it. On my second trip to the bathroom, I left my bag there in our diner booth despite my hard and fast pact, pleased to have the opportunity to show my feelings for her." 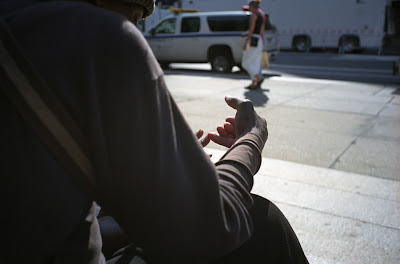 "On my way to the subway that night, after leaving Deborah on the steps of the James A. Farley Post Office Building where I had initially met her, I called Greg, the publisher of LoudMouth Press. I knew that what I had experienced that day was extraordinary, and I wanted to talk to him about it. I also thought Greg should meet Deborah because he was conducting interviews for the book, and she had shared so many heart wrenching, beautiful, surprising, intimate, and poignant stories with me."

"Being physically apart from her now, she started to manifest in my mind. I had photographed Deborah mostly while sitting next to her, because I wanted the images to show what it really feels like to be homeless, instead of photographing her head-on and showing what it looks like to be homeless." 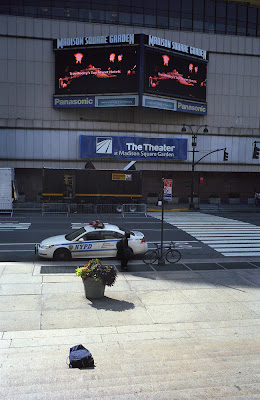 "...I knew I had to continue to photograph Deborah. Even though the assignment called for something broader and Greg had basically rejected the idea, it was suddenly so clear it seemed completely irresponsible to have left her on those steps without a specific plan to meet again. Panic periodically filled and deflated in me until that next morning, when I saw her sitting with her panhandling cup just where I had left her, grinning infectiously at my surprise return. I immediately felt relief and then shame for acting so stereotypically, assuming she would have progressed, that she wouldn’t still be there, that homelessness would have gone away. Why Are You Surprised I’m Still Here?" 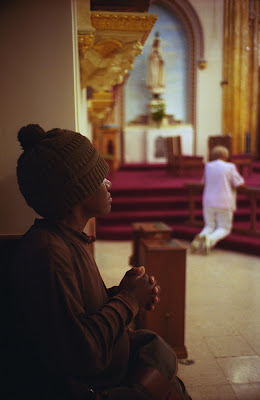 "I was entrenched in Deborah. I fantasized about helping her and I planned to do so. I stayed with her until noon or so and then focused on finding her a place to rest. It was hot and she was surely dehydrated and obviously in discomfort, it seemed insensitive of me to keep photographing her."

"Earlier she had mentioned a church she goes to, so I suggested we try there. When we arrived and opened the door, a kind of heaven unfolded. We entered from a side door near the altar while mass was in progress. A slight disruption, several people looked up at once at us with their wide, compassionate eyes and folded hands and smiled tenderly, and I knew we had found a place that would allow me to walk away from her. It was a stark contrast to the intolerance, disgust, and disregard with which people often looked at her in the real world." 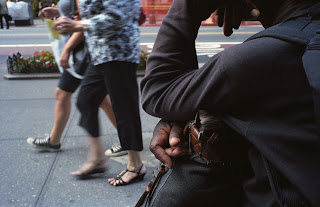 "...moving on from her, many difficult questions remained for me personally and for me as a photographer: How do I go on believing in what I see and how I feel when things turn so drastically on me? How do I continue to trust in humanity so much so that I can continue not to care how art dealers and editors assess the precious life I am amassing in photographs, or be bothered by the odd jobs that take me away from this passion in order to pay for film? How do I live inside the giant dumb ball when I know for a fact it’s dumb and it’s effortlessly floating in a dumb direction, even if it’s full of people who mean well? It’s enough to die of heartbreak, to go insane, to become clinically depressed, or to commit suicide—as many of us come to do.

But in trying to answer these questions I actually came to understand quite the opposite to be true. I realized that for some reason I expected the fantastic connection between Deborah and me to live on forever (as I often pretend I will). I was stuck in the future, basically, and as a result unable to be invested in how incredibly positive and uplifting the experience actually portrayed humanity, even though it came to an end—and how couldn’t it? How indescribably lucky she and I were even to have a few moments together, let alone two days, where our two disparate, fleeting lives could intersect, and so honestly and warmly, leaving so much goodness in its wake. It did happen. And it was as beautiful as I remember it. The giant dumb ball is actually inflated with our gasps for a future that will never come. And I have the photographs to prove it." 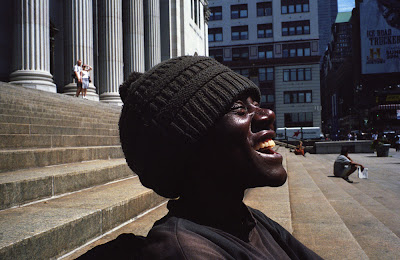