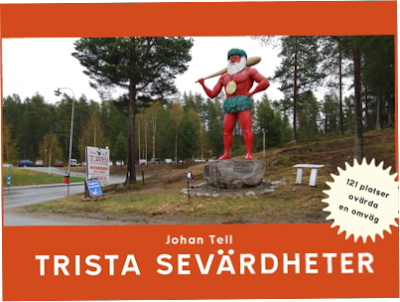 Johan Tell has been an editor, columnist and reporter for travel magazine Vagabond for 18 years. In recent years he has traveled all around Sweden looking for boring sights. The idea came to his mind when he spotted the symbol indicating a sight of interest in the southern town Kristianstad. It turned out to be a pit behind a gas station with a sign that read " Sweden's lowest point 2.41 metres below sea level". Quite boring.


His book "Trista sevärdheter" has recently been published. Find out more on Johan Tell´s website: www.johantell.se. Did I tell you that I love his project? - Mr Urbano 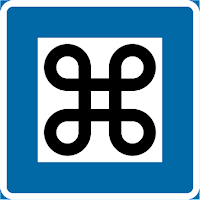 This is the symbol used in Sweden indicating a "sight of interest". All places that Johan describe in his book were marked by it. If I look down at my Mac keyboard, I find the sign too. How strange. Hendrik in Stockholm has more on this.

Ängelholm
UFO monument reminding of the flying saucer that Gösta "Pollen King" Carlsson claimed he had seen in the Siberian Forest, 18 May 1946. "Around the spacecraft were 11 creatures, both men and women."

Landskrona
In the 1980s, a former port director concluded that the Town Hall Square in Landskrona was the absolute midpoint of Europe. But the calculation was based on at least three errors. Well, the pen is there at the square. Period.

Edsbyn
The world's biggest bandy stick. Furthermore. Just outside the picture - to the right - is the world's largest ribchair. And a couple of ten meter long skis.

Gesunda
"You will also meet some of Santa's very best friends, the Witch and the Snow monster!"

Agnestad
It used to be Sweden's smallest round church.

Fredrika
In the winter of 2004, the Thai monk Phramaha Boonthin Taosiri decided to build Europe's largest Buddhist temple on a mountain in Lapland. Local politician Bert-Rune Dahlberg said in a television interview: "I do not think people understand how big this is." But the project stalled. The temple and the conference center have still not seen the expected 100 000 annual visitors.

Eskilstuna
In a corner of the Zoo you find the Cave of the Phantom, a hastily constructed cement skull that holds a few small rooms with catgold treasures, and a young man dressed as the Phantom. This poor guy in tights is sitting on a small throne mumbling all day long: "When the Phantom strikes, lightning stands still"
Labels: books boring Johan Tell tourism

Carrie said…
These are hilarious, thank you for sharing them.
21:40

paulboo said…
This dull stuff is actually quite fascinating :o)
23:19