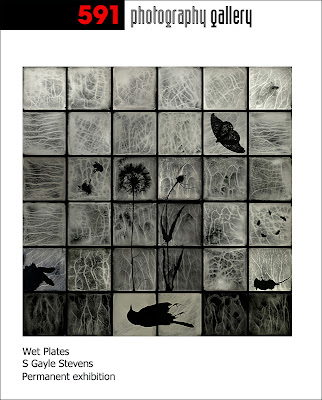 S. Gayle Stevens is showing us images from two of her series, Calligraphy and Pass. The image in the poster has recently won second place in the single photo category of the Lens Culture International Exposure Awards, 2011. Her work is fascinating and exciting...we look forward to more!   -R


Calligraphy consists of a series of wet place collodion tintype photogenic drawings of plant and animal specimens I have collected on walks near my home and in my travels. This series is inspired by "cabinets of curiosity", natural history collections from the 17th century, and the precursor of museums. The original meaning of "cabinet" was a small room; these rooms housed collections of plants, preserved animals and minerals. My collection contains diverse plant and animal remains. I have always been intrigued by what is overlooked in daily life and these objects are cherished for the unique beauty of their sparse remains.

I have rendered my drawings of these specimens in wet plate collodion. The silhouettes of the photogenic drawings are rendered as black shadows and echo the brushstrokes in Chinese calligraphy, sparse yet expressive. The Calligraphy series is composed of single and multiple five inch square plates displayed in the style of 19th century specimens and housed in black wood shadow box frames. This collection will be displayed as my personal museum of specimens collected on my daily walks. These images are my memento mori; an acknowledgement of lives passed, a rendering of fleeting shadows.

In this series I recorded the ruins that once were the town of Pass Christian, Mississippi, an artist community on the gulf devastated by Hurricane Katrina.

On the morning of August 29, 2005 Pass Christian, a community on the Mississippi gulf coast, lost all but 500 of its 8000 homes when Katrina’s storm surge topped the high water mark at over 30 feet and drove destruction more than half a mile inland. A once thriving artist community lay in ruins. Many residents have chosen not to return but their memories of Pass Christian remain the essence of this place. As time passes, blackberry vines creep over the remaining foundations; nature, like a shroud slowly covers Pass Christian. Over the past two years, I have returned repeatedly to photograph. To me, the loss of community is the most devastating aspect of this natural disaster.

For this project I have chosen to create my images with a medium format pinhole camera using wet plate collodion, a process that dates from the time of the city’s founding. The plates are small size and intimate. Pinhole and wet plate, when used in tandem, create a surreal world of depth and mystery. Wet plate captures the mystery the way dreams reveal what daylight hides.  ~S. Gayle Stevens

ABOUT the photographer
S. Gayle Stevens

mrurbano said…
This exhibition holds some of the most beautiful photographs I've ever seen. fantastic work Gayle. Many thanks for sharing with us.
22:01

jim rohan said…
I have been lucky enough to be in a couple of shows that have included Gayle Stevens' work. It just stands out from the other work. This is exceptionally masterful work that combines amazing artistic vision with supreme technique.
22:27

J. M. Golding said…
Very beautiful work even online - I can only imagine how amazing these must be in person!
07:09